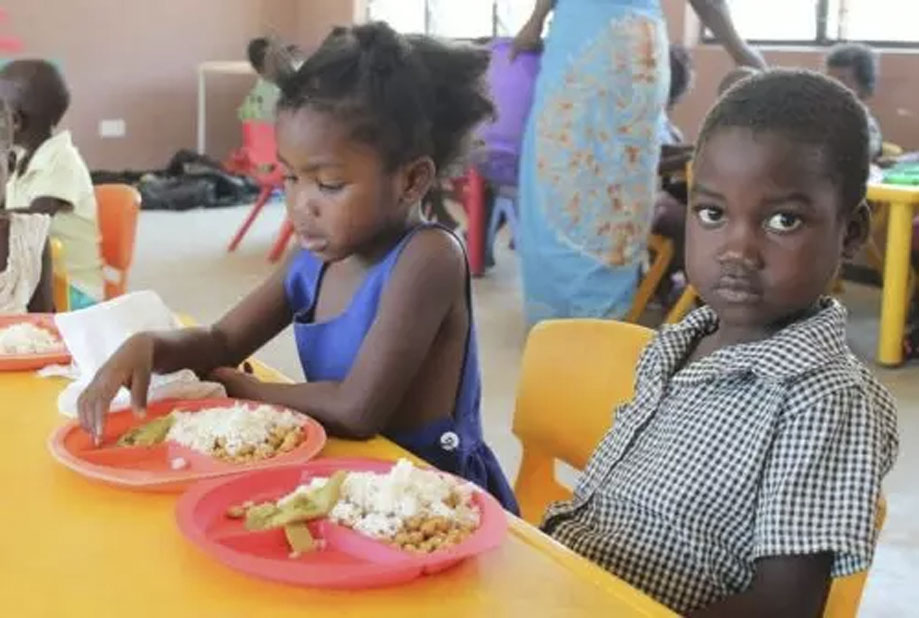 At noon, the bell at our school in Saint Mary (Benga) rings, announcing it’s time for lunch. From one class to another, the cooking staff carry the meals in large metal cooking pots, while the children await in disorganised queues, patiently clutching their small silver trays. The cooks fill each individual tray with three portions containing chickpeas, string beans and rice. Afterwards, the kids head back to their tables in solemn silence, astonishing the likes of all who have witnessed earlier the tireless hubbub emanating from the classrooms.

For many of the students at Saint Mary’s, this will be the only meal they will enjoy during the day, asides from the porridge they have for breakfast upon arriving to school. Malnutrition is an endemic problem in Malawi, a country affected by recurring food crises due largely, among other causes, to its adverse climatic conditions, low agricultural productivity and high levels of poverty. In general, the food energy supply does not cover the needs of the country’s 19 million inhabitants, in particular those pertaining children.

Moreover, 89% of Malawi’s population solely relies on agriculture for its livelihood and maize is the most widespread crop. This cereal is the main ingredient in nsima, a dough made with water and flour that constitutes the region’s staple dish // the principal dish in the region’s local diet. If the family has some money, they can serve it alongside vegetables, meat or beans – products with an extremely expensive price for poor families. Hence why many children who lack resources have a deficiently diverse diet with few micronutrients.

The consequences of a deficient diet

Despite the fact that long-term breastfeeding is widely spread in Malawi and that universal salt iodisation was implemented decades ago, statistics are overwhelming: nearly half of the children under the age of five suffer delay in their growth and approximately 75% endure symptoms related to anaemia and a Vitamin A deficit.

For years, the Government of Malawi has been trying to encourage agricultural diversification and to popularise other crops, such as beans, manioc or sorghum, that help to improve the population’s levels of micronutrients in a sustainable However, up until now, these efforts have been in vain as the country endures chronic malnourishment.

The effects of a poor diet on children’s health, particularly during their early childhood, can be disastrous and can forever condition their development: by delaying their physical and cognitive progress, decreasing their IQ and increasing the long-term probabilities of developing behavioural and cognitive problems. Moreover, a child’s defences against numerous childhood illnesses are diminished can leave permanent effects on their health.

A stimulus to go to class

This is the reason as to why all of our children educational projects unavoidably include nutritional care. Thus, in St. Mary the kids not only obtain infant and Primary education, but also receive two meals on a daily basis, which are rich in micronutrients such as legumes or vegetables as well as, at least twice a week, meat or fish.

Some of these products are purchased in local markets; yet, to ensure their supply we annually organise our “Food supplies for Malawi” campaign. Each year it provisions the MCSPA Benga mission with several tonnes of food, ample enough to supplement the student’s diet for nearly half a year.

As Manuel Hernández, MCSPA project coordinator in Malawi, points out, “knowing that their children will be well fed is an important incentive that encourages families to send both boys and girls to school”, and furthermore, “this greatly improves class attendance levels”.

Once at school, surrounded by books, games and motivational teachers, children in Benga are happy and throughout the day fill the air as they roar with their vivacious voices, laughter and songs. Obviously, this only lasts until lunchtime ensues.

Click to learn more about Saint Mary’s School in Benga